Captain Z & the Terror of Leviathan 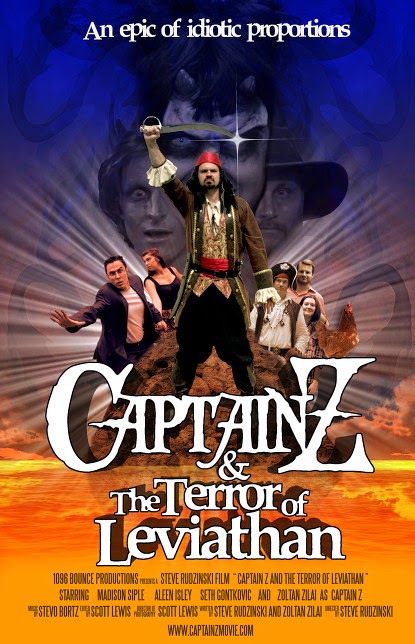 Steve Rudzinski is a director I discovered through fellow indie film maker Dustin Mills.  I was familiar with Everyone Must Die, but never got around to checking it out.  Then I heard Dustin was going to be doing some effects work on a Tokusatsu flick called Super Task Force One.  It looked like something that would be right up my alley, so I donated to the Indiegogo campaign immediately.  In the meantime, I decided to finally watch Everyone Must Die, and I immediately fell in love with Steve's sense of humor.  Everyone Must Die was a bit rough around the edges, but it was a horror-comedy that favored absurdity over low-brow jokes, and that was something worth celebrating.  Super Task Force One was even better, but received little fanfare because it was a more family friendly film.

This is the problem with Steve's work.  His films are hard to market in an underground market saturated with people who just want gore, tits, and shock.  There's not a lot of interest in lighthearted material like this.  This is also a problem that plagues another indie guy I admire, Frankie Frain.  These are guys whose work would actually benefit from more mainstream exposure.  Luckily, I'm one of the handful of people involved in the underground who has an appreciation for all types of different film genres.  I don't know about anyone else, but only exposing yourself to one aspect of indie culture seems boring, and eventually, you just become numb to it all.

Captain Z & The Terror Of Leviathan is Steve's newest film, and it is by far the best work he has done.  For one thing, he had a more substantial budget of around $15,000.  To a lot of people, that's not a lot of money, but in the world of microbudget cinema, that's huge.  The money was well spent, and it gives the movie a look of absolute professionalism that you don't see a lot of in true indie cinema.  There's no doubt that this film is low budget, but it overcomes its limitations marvelously.

First off, I have to commend the acting here.  If there's one thing that can really derail an indie comedy, it's poor acting.  Comedy, after all, depends on impeccable timing.  The character of Captain Z, played wonderfully by co-writer Zoltan Zilai, could have been a one dimensional caricature.  However, Steve doesn't operate that way.  Unlike contemporaries like Chris Seaver, Steve is interested in creating characters you can relate to.  He favors wit over stupidity, absurdity over flatulence.  Madison Siple is equally good here as Heather, the obligatory airhead.  Once again, her character could have had no depth, but despite being dumb as a rock, she's actually wonderfully funny.  This is the first film Madison has done, and I'd love to see more of her.  Not only is she drop dead gorgeous, but her comic timing is fantastic.

The effects work here is some of the most ambitious in any of Steve's films.  They aren't always successful (once again, I have to call attention to the fact that I hate low budget CGI blood splatter), but for the most part, they look quite good for a low budget production.  Steve's not the most stylish of directors, but he's definitely maturing with every film.  Recently, I saw a film that Steve was in, Scream Park.  The movie was fun, but messy.  After hearing how much it cost, and realizing that none of the money was on the screen (the budget was way higher than the budget for this film), it made me truly appreciate a film like this.  This isn't a bunch of kids fucking around.  There's real passion here.

I really do recommend this movie quite a bit.  It's a charming bit of pirate demon hokum, and reminds me of the types of films I used to see at the Saturday matinee.  The script is a real delight, and everyone plays their parts beautifully.  It's going to be hard for a film like this to find an audience in today's indie scene, but I know there's a lot of you out there like me...people who love a good bloodbath, but also appreciate a good Woody Allen movie from time to time.   It's lightweight and unpretentious.  Grab a beer, order a pizza, put on the Power Rangers pajamas we all know you have, and just give in to this wonderful example of what indie cinema can be when it's made by people with real heart.  It's not perfect, but fuck perfection.  I'd love a sequel, Steve.  Get on it.

Until next time, my fellow freaks and weirdos...

Got a screener? Email blacktooth@horrorsociety.com