Legend of the Hillbilly Butcher 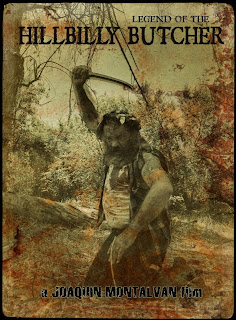 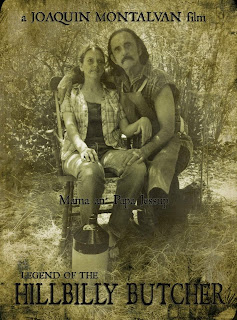 What can I say I was totally blown away by Legend of the Hillbilly Butcher.  The movie started out with an old man telling children of the Legend of the Hillbilly Butcher and it had me from the first minute.  Kind of mockumentary style...reminded me a lot of the films of Charles B. Pierce like The Legend of Boggy Creek and The Town That Dreaded Sundown.  We have the story of Carl Henry Jessup a backwoods moonshiner, murderer, and cannibal.  What else can you ask for in a hillbilly horror movie?  I was going in expecting just a typical hick slasher movie based on the cover...never judge a book by it's cover.  At first when I started the movie and the fuzzy out of focus scenes began with film lines and what not I thought it was the screener.  Then as the movie continued I figured out real fast this was purposely done in order to create the retro feel like an old film from the seventies.  Or at least that's my take on it.  Totally worked for me and in this day when films like the Texas Chainsaw Massacre remake and even Rob Zombie's Devil's Rejects are claiming to be throwbacks to 70's style films it really shows how these examples flubbed the whole cinematic look.  You can't use expensive modern film cameras if you want this look.  Even Planet Terror by Robert Rodriguez tried really hard to have all the hairs, lines, and marks of older film to make it look old school and I don't know what it was it just got really annoying to me because frankly it didn't look like movies from the 70's at all.  Legend of the Hillbilly Butcher most certainly did and it wasn't even shot on film.  Neener, neener to all those you can only shoot on film people.  I'm sorry this movie outright proves that all wrong.  Video is just another medium and I'm proud to say I'm a video fan.
﻿ 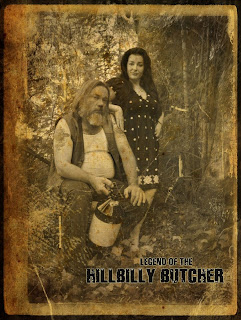 Carl Jessup is played by Paul E. Respass and I must say the man was perfect for the job.  Paul was a perfectly natural actor as was his sister partner in the film Theresa Holly who played Rae Lynn.  Another notable actor was Chris Shumway who played their friend Billy Wayne but really I had no real complaints with any of the acting in this movie.  No not all of the victims of our favorite Hillbilly Butcher were tremendous performances but in my humble opinion it worked perfect for a throwback drive-in style 70s movie.  I mean how great were some the films of H.G. Lewis and none of his movies had all that great of actors. 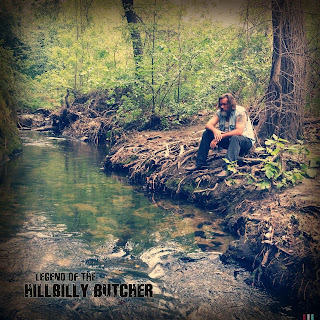 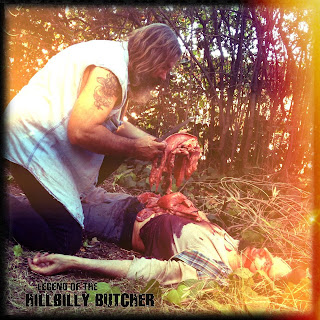 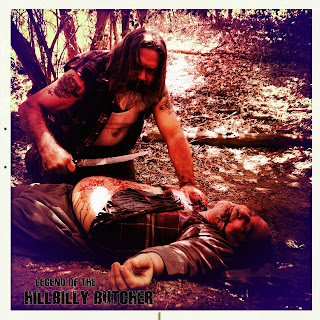 The killings were great.  No cgi blood no super special fx...nothing to take away from novelty of what I feel the filmmaker was going for in making sure the movie looked, sounded, and acted like a lot of my favorite old school ways of making movies.  Carl didn't like anyone trespassing, fucking, or stealing his moonshine.  He and his sister even take in their friend Billy Wayne and when Billy decides to rape and beat Carl's sister he as well ends up on the dinner table.  Yes Carl is a cannibal which is completely unknown to his sister who towards the end of the film discovers her brothers secret and...well I'll leave the end alone in this review.
I really must say in no disrespect to any of the other actors in the film Theresa Holly was the shining star.  She really showed an array of emotions most especially during her rape scene.  Let's talk about the rape scene for a minute for me it really had the feel again older rape/revenge movies most especially I Spit On Your Grave.  Rae Lynn is getting beaten and Billy is on top of her in the scene and then it fades to her walking through the woods to Carl's house.  All you see is her feet, legs and tattered, torn dress in a very surreal scene of helplessness and shame.  Of course the moment Carl finds out it was Billy Wayne he goes out in search of his old friend with a new batch of poisoned "shine" for him.  Billy pretends as if nothing happened and when Carl brings him a jar of poisoned moonshine and he is apprehensive at first but drinks it down anyway.  This death is one of my favorites in the movie for no other reason than it was different than the rest Carl got creative and I imagine it was the most painful of all the murders.
Legend of the Hillbilly Butcher may not be for everyone and if you have no experience with either old school drive-in style grindhouse films or independent/underground movies then I'm sure you will hate it.  But if your movie watching goes beyond Hollywood theatre popcorn films then you should have a blast I know I did and can't wait to watch it again.  The cinematography of the old house and the woods around was enough for me to enjoy it.  The sounds of the crickets and frogs chirping as wekk as the old banjo music by K. Collins and the great fx by Erika G. just all came together creating one awesome independent film.  I can't wait for more Joaquin Montalvan. 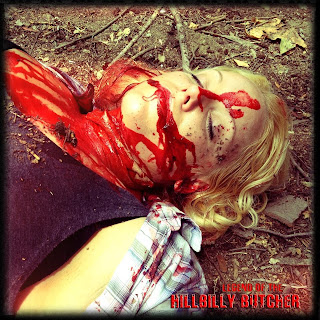