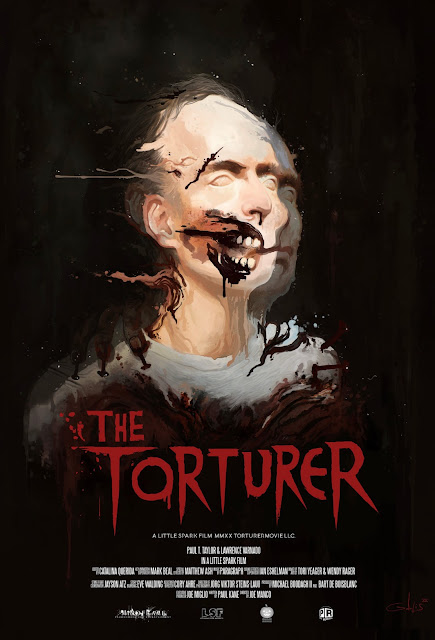 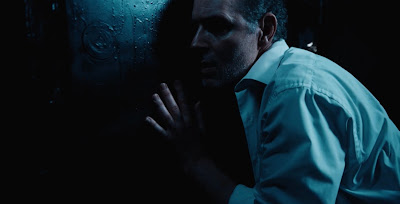 If the grit of Se7en had a baby with the torturous heart of Clive Barker, and the child was raised by Jigsaw, with Grandpa Argento decorating the nursery, and that being could be trans-mutated into a short film, it would be Joe Manco's masterful interpretation of Paul Kane's story: the Torturer.  I will admit, I went into this with little expectations, as many shorts fall flat, due to time and budget constraints.  I couldn't have been more wrong.  I walked away from this feeling like I had sat through a full-length feature, that had my attention from opening to closing credits. 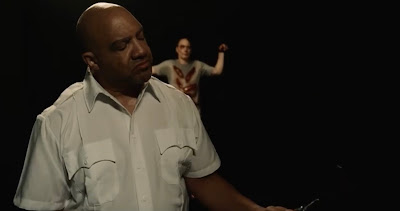 The film begins with a vague introduction to our main character, Andy, being captured and thrown into a dark room.  Many suspense/thriller types that try this leave the audience too confused to get into the unfolding plot until much further in the film.  Not this one.  The intensity of the interrogation consumes you, despite not knowing anything about the lead's back story.

The ambiguous nature of the story is the fuel for the cinematic, wildfire.  As soon as we are drawn into the passionate queries of the Torturer, we are smashed in the face with some of the best, lower-budget torture effects I've seen.  Far from being "torture-porn" the violence takes you right to the edge of unbearably gruesome, only to let you breathe for a bit, before the next round.  This is the kind of ebb and flow that genre films have lacked for far too long.
Ambience, emotion, isolation and atmosphere are the main tools that comprise the cinematography, which could be best described as visual and visceral poetry.  The extreme, uncomfortable closeups tug the strings attached to the part of my heart reserved for the love of this Fulci-esque style.  It is absolutely gorgeous.  Rhythmic dialogue is the melody, enhanced by the harmony created with superb sound design. 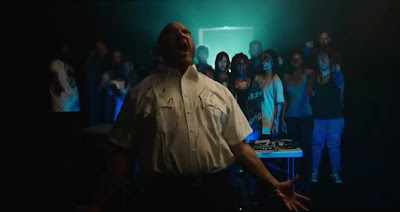 Without giving away too much of the plot, I have to touch on the surrealistic sequences with what we would call “The Victims.”  Again, ambiguity prevents us from being able to put our finger on whose victims these people are and what relation Andy has to them. The effects here harken back to splatter films of the 80s, but with the Giallo-esque lighting, they are used with excellent precision. At no point, is anything gratuitous. On the contrary, it is painful, It is gory, it is art imitating life.

The major arc in the story is obviously the relationship between the Torturer and Andy. It is in no way like Hostel or Saw, as it is not done in a sadomasochistic way or as means of moral teaching, it is that of the cerebral kind. Questions are asked, no clear answers are given and as a result, the Interrogated is punished. Let’s say Lawrence Varnado’s performance is more reminiscent of a vengeful God or perhaps a Cenobite, without the supernatural element. I am reminded of the early Nine Inch Nails home video for the Broken EP, especially the sequence for Happiness in Slavery. If you can imagine Michael Madsen from Reservoir Dogs torturing the police officer, except he’s a little more of John Doe from the movie Se7en, all in the realm of psychological horror, you’re getting close. 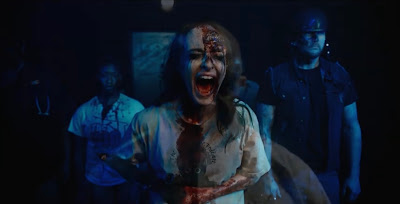 I give this film 4 1/2 Evil-Ed-Heads, shy of five ONLY because I would have love to have seen it stretched to a full-length (could be done easily with the character depth and the passionate plot) and I would like to go further with the visual effects. I’m a SFX Makeup nerd, what do you expect?
Posted by Rev. Robert Mf'n Rippeth at 4:55 PM